Late tonight in much of North America, people will turn their clocks back an hour as Daylight Saving Time ends in 2018.

Today on Twitter, I saw a great question from Ken, quoting the Seattle Times reprinted article by Frank Kummer on the point of Daylight Saving Time: 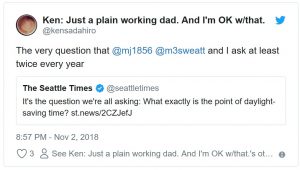 IMHO, it’s all about the economics and politics.

Mr. Kummer notes that 84 percent of European citizens were in favor of doing away with it, but that there’s no similar movement in the U.S. Well, maybe not today at the Federal level. Actually there’s plenty of activity at the State level in the States: over the last couple of years we’ve spoken with many different representatives who’ve proposed or opined on making moves for a number of different reasons.

States like Florida, Mississippi and New Mexico considered the former, while Alaska, Oregon, South Dakota, Texas, Utah and Washington looked at permanent standard time. On the worldwide stage, we often see similar considerations from countries and sovereign states, to perpetually embrace or abandon DST, often hitting the news this time of year for early in the spring. Some of these efforts had reasonably long lead times. Back in 2011, I wrote on the @Microsoft corporate blog about the end of daylight saving time in the Russian Federation. (blogs.microsoft.com/blog/2011/09/2…)

But like the immortal title of the famed Thunderball sequel “Never Say Never Again”, the government considered a return to seasonal or perpetual Winter Time a year later, depending upon whom you were speaking at the time. But I digress. In the States, this was last addressed at the Federal level in 2005 with the amendments to Energy Policy Act of 1992. Specifically, the changes were to the start and daylight saving time to amend the Uniform Time Act of 1966. (IIRC, some of our own folks even participated in the discussions and submissions.)

In supporting such amendments to what would become the Energy Policy Act of 2005, you can understand why lobbyists for this change would include the Foundation to @FightBlindness. But you also saw the National Association of Convenience Stores support the changes (think a lighter Halloween) joined by the Sporting Goods Manufacturers Association. (Couple those with the lobbyists from oil and gas supporting other provisions of the Act)

You can learn more in this piece by NPR, which is covered in Michael Downing’s book “Spring Forward: The Annual Madness of Daylight Saving Time.” (npr.org/templates/stor…)

So it seems that like much of the legislation we see in state and national politics, such moves to change DST are driven by business interests rather than health and goodwill. In 2006 when working on the effort in Windows and across Microsoft, I heard how candy manufacturers had long lobbied their desire to see the Halloween holiday be included in the summertime Daylight Saving Time change. Imagine: if kids were able to spend more time trick-or-treating, home bound chocolate and candy corn benefactors would need even greater stores of candy. (And this all to the often repeated call of “Halloween Apples” in my hometown, tho’ we rarely received any.) 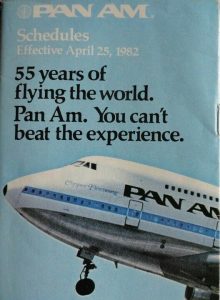 Lobbyists against the changes in 2005 included the National PTA, and of course the Calendaring and Scheduling Consortium and the Air Transport Association. Remember a time when Airlines used to print those small voluminous books of the schedules for departure and arrival times for all their flights?

Now please pardon me while I take a break to refresh my memory and make a fresh cup of ☕️ to mull on a few topics particularly around the areas where different studies supported or detracted DST.

It’s all coming back to me, like the time we watched closely back in late 2007 as Venezuela moved to a newly created time zone, shifting by 30 minutes to -4:30h UTC (blogs.msdn.microsoft.com/mthree/2007/11…)

For some changes, the notification comes challenging late, as we saw with Morocco and Pakistan in 2008, switching from one traditionally used GMT offset to a new one. Such changes impact customers and partners in the regions who use local time zones, as well as others entities engaged in business in or with the region. (Remember those flight guides?)

Unfortunately, due to the short notice provided for these late breaking changes with short runways, companies can’t always provide updates incorporating these changes. So when Morocco admirably decoded recently to stop the “fall back” (at least in the northern hemisphere) to Daylight Saving Time, it was only decided and announced days before the country was scheduled to turn clocks back. It may save “an hour of natural light” () but it creates a maelstrom of activity around the world as people speculate on whether or not the changes will be locked perpetually. (bbc.com/news/world-afr…)

That’s why Microsoft created and published a policy in response to Daylight Saving Time and Time Zone changes around the world. (support.microsoft.com/en-us/help/228…) It includes some simple recommendations to provide, first, ample advance notice (12 months or more) before a change to DST or alignment with a particular time zone,

Second, an official confirmation of the changes, and third, a yeoman’s effort to promote the change – locally and on the worldwide stage (as often such changes have far-reaching implications). So as more and more states and countries consider such changes, these guidelines become increasingly important. (washingtonpost.com/amphtml/world/…)

In my day job, we still have regular discussions on the topic as a group of resident “time lords” keep time and our systems on track. (wired.com/story/microsof…) (Although I’d like to think of myself more in line with the sharp wit and sarcasm of the Fourth incarnation of the Doctor, I’m more in line with the Third)

Having worked across all of our product groups (originally the majority was on-premises products) for the last few years on things like DST, it‘s fitting that much of my time is now spent on how we retire many of those same products in our corporate-wide end of support efforts. We dedicated several cycles with our online services to the topic of time and date management, and you see that reflected in the increased attention to the topic across the company. So, back to the initial question: What exactly is the point of daylight saving time? The not so easy answer: It depends. The initial benefits often touted more daylight hours during the day when more people were active, provide greater energy savings, lower incidents of crime, heart attacks and crime. (Mom and apple pie sentiments)

Increasingly, it seems to gain legislative momentum when specific commercial interests see material benefits as a result of making a change.

The @PBS @NewsHour said it well, capturing the absurdity of how “opponents and supporters of daylight saving are still not sure exactly what it does.“ (pbs.org/newshour/amp/n…)

And how, a century after Congress first passed the inaugural daylight saving legislation in the States, are there still questions and debates as to why DST is still a thing. Without planning, it will continue to be challenge to track future changes in a timely fashion.